The Charge-Location Management API will be made available over the course of Q4 2022 to our Customers for feedback. On an invite-only basis, we would like for our Customer to test the new functionality and provide feedback.

During this time, GreenFlux reserve the right to make breaking changes with shorter notice periods than usual. Until GreenFlux has officially indicated that it is a stable API, we ask Customers not to build any business critical processes on top of this API.

These APIs have the following new properties:

Until a definitive API documentation is released, this section outlines the current state of the API

Who should use these APIs?

The current 'Platform APIs' are strongly based on OCPI, since originally they were just forked from the roaming side and made available to CPOs to retrieve their own data.

We believe that amongst our CPO Customers there is generally a good understanding of OCPI APIs and therefore these APIs are designed to stay as close as possible to the OCPI documentation.

We have largely made the Locations object backwards compatible with OCPI 2.1.1.

As we already did in the previous iteration, we have added additional, custom GreenFlux fields to the object, such as:

New is also the ability to create, update and patch a Location object.

The Charge Station object does not exist in OCPI, so we have used the current structure that is in the Portal as a basis.

In principle, any field that is visible and editable in the EvPortal for a Charge Station can be updated via the API (except for Configuration, which will be addressed in future APIs)

For these APIs, we follow OCPI guidelines. They state that:
If a request is syntactically valid JSON and addresses an existing resource, a HTTP error MUST NOT be returned. Those requests are supposed to have reached the OCPI layer.

This means that e.g. a POST request to create a Location that is missing a required field will return a HTTP 200 code, but will have a OCPI 2000 status.

Another example of a PUT upsert where the etag is out of date: 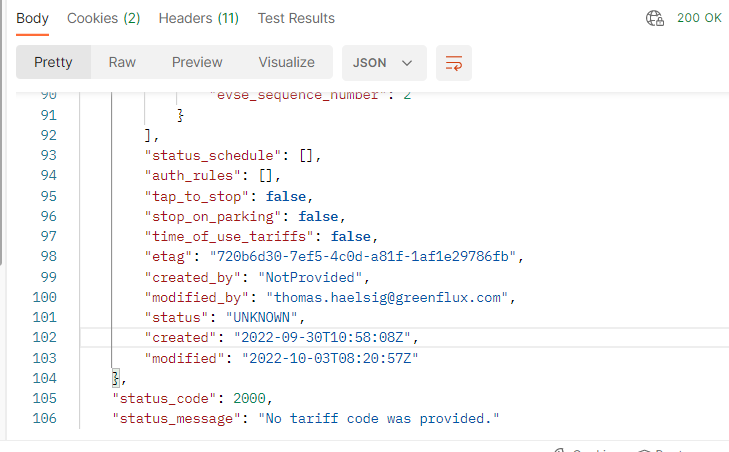